The cost of power was a major issue in the early 1980s, as rising fuel prices pushed up electric bills. Repeated wholesale power cost increases from Boston Edison prompted the Light Plant to take legal action on several occasions, often in concert with other municipal wholesale customers. The legal actions, while time consuming, resulted in multi-million dollar savings for electricity consumers in Concord, as case after case was decided in the Town’s favor. The 1980 settlement between Concord Municipal Light Plant (CMLP) and Boston Edison allowed Concord to purchase the use rights to the 14 kilovolt distribution facilities located between Edison’s Lexington substation and the town line. CMLP also bought the Edison facilities within Concord that were used solely for Concord’s service.

The agreement stipulated, in part, that Edison would not make any wholesale rate increases before retail increases. This was to prevent further price squeezes. The provision became effective March 1, 1980, and ran for five years with a possible renewal in another five years unless either party canceled. Not surprisingly, Boston Edison canceled the 1980 agreement after exactly five years and began raising wholesale prices again. By the mid-80s, Edison’s actions had placed Concord in another price squeeze, resulting in another anti-trust case. This time a jury awarded CMLP $5.9 million, with treble damages, for a total of $17.7 million. Unfortunately, the award was overturned on appeal by Edison, and the U.S. Supreme Court declined to consider the matter.

In 1982, CMLP joined the New England Power Pool, an organization that monitored and controlled the region’s power supply in order to minimize outages and maximize economy. That same year, the Light Plant joined the Massachusetts Municipal Wholesale Electric Company, a nonprofit, public corporation created to provide power supply, financing and other services to the state’s municipal utilities. These moves allowed CMLP to consider other wholesale power options in addition to those offered by Boston Edison. The mid-80s brought some good news in the area of power supply, when Federal authorities ruled that residential customers of municipal utilities in Massachusetts were entitled to receive a share of low-cost hydro power from the New York Power Authority. The savings from this low-cost power appeared as a credit on customer bills.

The issue of placing utilities underground, which had been periodically under discussion since the Light Plant was founded, was finally decided in September of 1986. At that time, the Light Board voted to inform the Planning Board and Board of Selectman "that the ultimate long-term goal should be to underground everything in town." The 1987 Town Meeting voted to support this goal. John R. O’Neil, Light Plant Superintendent since 1970, retired in 1987 after 37 years of service, and was succeeded in 1988 by Daniel J. Sack. By the late eighties, a major distribution system upgrade was in the works, with preliminary plans underway to construct a 115,000 volt substation. The higher voltage was aimed at improving system reliability and efficiency, while allowing for future growth.

Technology was changing the face of office operations as well, with new additions such as an upgraded computerized billing system and electronic metering for large customers. Helping customers to use energy wisely became increasingly important during this decade, which had seen the introduction of home energy audits offered to residential customers in 1984. In 1989, the position of Energy Services Coordinator was added to the Light Plant staff, as a way to help educate customers on energy conservation, environmental matters and other energy-related issues. 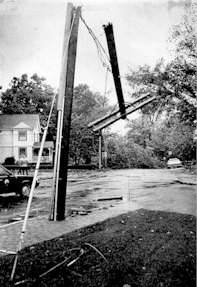