The post-war building boom went into full swing in the 1950s, with homes going up all over Town. A major project in 1950 was the 75-home subdivision off Sudbury and Garfield Roads called New Towns, now called Conantum. The initial phase of construction for underground distribution equipment at the Mill Dam was completed in 1950 at a cost of $37,174, but the Light Board cautioned that additional underground work would progress slowly due to its "significant cost."

Construction throughout Town included new street lighting, and in April of 1950 the Light Board voted that granite curbing should be installed between new light standards and the street to protect them. "The Manager is instructed to install same if Road Department refuses," the Board noted.

The question of wages for Light Plant workers was addressed at the beginning of 1951, when the Light Board implemented a wage scale equal to that of Boston Edison. 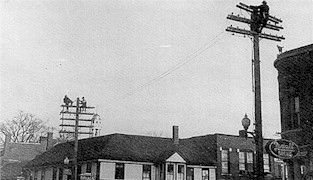 Concord Linemen at work, circa 1950: George T. Barrett, Edward McKenna, Linious C. Merchant, and Charles J. Sheehan, Jr.
Just a few months earlier, employees had been praised for their "fine performance in making repairs after the hurricane of November 25-26, 1950." The Light Board noted that some employees worked on hurricane-related repairs for 24 hours straight.

Everett E. Pierce retired January 1, 1952 after managing the Light Plant for 31 years. Russell I. Eldridge was named his replacement, at an annual salary of $5,500.

Subsidies for installing electric ranges were discontinued on December 31, 1952, when some 90 percent of new homes were voluntarily using electricity for cooking. The $40 cooking subsidies, introduced in 1931, were deemed unnecessary, although the $40 electric water heating subsidies remained in place until 1954.

In 1954, the Light Board discussed plans to move the main office from 34 Main Street to a central location with the Highway Department. Bimonthly billing was implemented on September 1, at an estimated savings of $4,000 per year. Shortly thereafter, the Light Board approved the Home Products Store in West Concord as a collection location for electric bills. And that fall, the town was hit hard by hurricanes Carol and Edna, which caused more than $27,000 in damages to the electric system.

On July 5, 1956, the Light Board noted the retirement of longtime employee Dennis S. Horne "after 45 years of faithful service and 34 years as Foreman of the Light Plant."

New home construction meant new school construction, and in 1957 the Light Plant decided to install a private pole line to the new elementary school on Old Bedford Road. Some seven poles and a transformer were installed at a cost of $1,600.