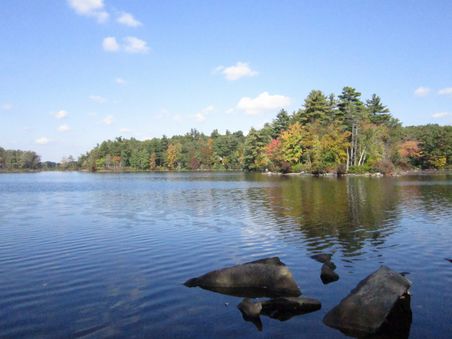 The Town of Concord (the Town) is in the process of making comprehensive improvements and upgrades to its existing surface water supply known as Nagog Pond, which has been utilized by the Town as a water supply since the early 1900s. As part of these improvements, the Town intends to replace the existing 16-inch cast iron intake pipe with a new 16‐inch inside diameter (ID) high density polyethylene (HDPE) intake pipe.

The existing intake pipe extends approximately 1,800 feet into Nagog Pond from the gatehouse at the dam and is partially supported by wooden cribbing in some areas and is covered by sediment in others. Physical inspections of the intake pipe have indicated that it has significantly deteriorated, resulting in decreased hydraulic carrying capacity and risk of failure. Due to the condition of the existing intake pipe, the Town is replacing it with a new 16‐inch ID HDPE pipe, which includes an intake structure with an intake screen and automated air burst cleaning system.

The proposed work includes two phases of construction. Based on the plan of work proposed by the selected contractor, the first phase of the project will involve deep water work which will include fusing and floating of the intake pipe along the water surface and then submerging it into position, followed by a later phase of work that will involve dewatering and limited dredging performed along a portion of the shallow pond bottom (the cove).

Director of Land Use and Economic Development